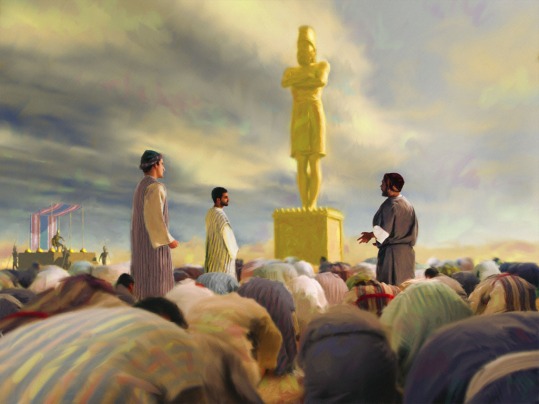 [This week I’ve been covered up with custom calligraphy orders, including one extensive project where I get to do traditional calligraphy and illuminated letters, which makes me excited every time I think about it! I’ll post some pictures a little further on in the process. In the meantime, I thought I’d share a fairly recent poem. This one was awarded the first-place prize in the 2018 Utmost Christian Writers Contest back in April and was first published as part of that contest.]

Nebuchadnezzar made an image of gold.
He set it up on the plain of Dura, in the province of Babylon.
Tenderly the king took the bread from the mouths of the children,
tended to his own likeness like a hen broods over
the chicks under her heartbeat.

The king was consumed with his significant self;
he dwelt at the mirror and spun his sonnets there,
and into his circle of devotion he took the whole world.
All the world is pouring out into Dura
like threads of ants to a crisped cricket on the black leaves.

Isn’t a crowd like a large beast looking for something to kneel to?
Their eyes are hungry for divinity, their ears are cups
to catch the fifes, the tubas, and the big kettledrum.
Point but a finger and you fell them:
There in the soft gold is your god!

Once upon a time we believed in a sea-splitter, a bush-flame,
a harvest of water from cliff,
snowflakes of honey flowering in the fields.
The I Am spun out the novas like tops –
who is this housebound heap of mute metal?

The born-abroad boys have their hands up already,
ready to host handcuffs and the looped iron.
Their laughter is like all the bluebells that jubilate the meadows.
They are like three men who met death on a whim
and struck up a downright neighborly acquaintance with her.

I have lived in too many places and I'm homesick for the Far Country. I like thunderstorms, painting, calligraphy, fairytales and noisy crowds of children, and I write about literature, the good life, and the World’s Great Lover. In my spare time, I create calligraphy and illustrations celebrating literary masterpieces. You can find my work in my Etsy shop or request a custom order.

Letters From The Sea Tower

On Homesickness: A Letter To My Children

On Adventure: A Letter To My Children

On Growing Up: A Letter To My Children

On Heroism: A Letter To My Children

What If We Are Alone? [A Marsh-Wiggle Speaks]

The Lame Shall Enter First

The War From Where We Are

On Dorian Gray, Pre-Raphaelitism and The Treason of All Clerks

The Stag Who Lived Forever

Regarding The Time That is Given To Us

On Suffering, The Russian Soul, and the Kingdom of Heaven

On The Importance of Being Smike

On That Always Aching Wound

My Song is Love Unknown