[Someday, perhaps, I will have children. If they’re anything like me, they will be afflicted with a craving that creeps up at unexpected moments, and gnaws like hunger. How will they know that I too was young once, and didn’t belong anywhere? How will they know about all the music I’ve switched off and the mountains I’ve looked away from and the magazines I’ve closed up and put back on the shelf, so as to keep the sorrow of unfulfilled things at bay? How will they know there is a thread to tie up all their scattered affections? I will write a letter…]

You don’t belong here. I’m pretty sure you know this already, although perhaps you’ve not expressed it in exactly this way. However, I think you should express it in this way.

I don’t know what the colors will be on the flag you stand under at crowded events and in places of national significance, but I can tell you for certain that you aren’t represented there. Though you stand with your brothers and pledge to defend that portion of the earth that has come to belong to you, you mustn’t suppose for even a moment that you belong to it.

You found something once that you wanted to buy and you didn’t have the money for it. A telescope or a helicopter that really whirs overhead and crashes into telephone wires. A doll with a pearly porcelain face and dark braids. You bent your being to that thing, and you worked long hours for it, and you turned down other simpler pleasures, and abstained from candy and small purchases, and it was all a great delight to you, for your eyes were fixed on a better thing. But when you acquired it in the end, you so soon grew tired of it, and put it aside. One day, you walked into your room, and tripped on that prized possession in the doorway, and broke it, and threw it in the trash.

In this way, you know you can’t put any confidence in anything you touch, for if you lean into it, it is sure to give way. Indeed, everything is slipping away. And even this youth you’re passing through today, will fade into a memory you wish you could enter again.

The blue planet has housed you for some time now, and you’re starting to understand that something isn’t right. In spite of all that is startling and surprising and good, there is a mournful well of emptiness at the bottom of every cup. The question is, is the lack in you? Or is it in your sad, unsatisfactory corner of the world?

Or is it in the world?

My children, I have been in the world. I have made my home in more than one sad corner of it. I have lived more than half of my years in a country where a different language was spoken and with a people I didn’t belong to – although through the love that I had for them, they came to belong to me. When I was just coming out of my childhood, I left that place suddenly and was planted in the country that was mine – but which I didn’t love and had no part in.

I knew that it would hurt. But I didn’t know it would go on hurting, day after day, week after week, month after month, year after year. I didn’t know I would never be able to hear the music of that country with my heart healed of aching. I didn’t know that the sound of other languages – any of them – drifting through a park or over a television screen, would make me alert, and tense, and hungry. I didn’t know that the National Geographic would be a pain I would pursue in an unreasonable way, flipping the pages, and closing the book, and opening it up again. I didn’t know that sometimes I would change the subject suddenly in conversation, and sometimes I would babble on at inopportune times, half-hoping someone would see my grave wound of displacement and ask me about it, and half-hoping no one would.

It’s remarkable – the way we can use words without feeling their import like a knife in the heart. Like the way we can talk about homesickness and not realize what we’re talking about is a malady that wakes people up at night in dread and in loneliness, and makes every place desolate.

There are times when I put my knuckles in my mouth and cry for no apparent reason, except that I’ve fancied I smell the sea on the air, or someone on the street looks like a child I once knew, or down a hallway someone is playing oriental dance music.

I and the others who’ve been through the nations of the world, we know this by now: how it’s possible to be homesick for so many countries, and not at home in any of them. How the awkward neutral ground of the airport can be the most comfortable place you know.

Poet W.S. Merwin wrote in his poem about airports,

But this isn’t so. For we never forget where we’ve been. It comes back to us in strange ways, whether we wish to remember it or not. It comes in the fragrance of tea leaves, or a certain slant of light on the snow. It comes in snatches of so many songs and in the contrails that crease the sky. It comes in old fuzzy photographs that you don’t remember ever seeing, and in power outages and firelight and pink thyme-flowers, and billowing storms. It comes in hot soup, and unexpected valleys in the forest, and etched words on trees. It comes back to us in the lights behind doors that are shut. 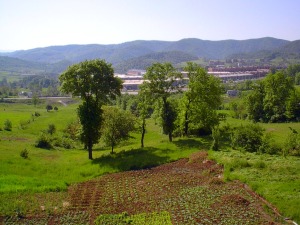 Dear children, I think you should know that all your life you’ll be haunted by these echoes that come out of nowhere and ravage your contentment. And whether you travel to all 196 countries, or never get beyond the town you were born in, this ache that tells you what you have isn’t enough – it isn’t going away.

In Greek, the word is nostos. It means to return. The word that is wedded to it, is algos. It means suffering. We call it nostalgia, a suffering caused by the unappeased longing to return. But this isn’t quite true.

Let me tell you something you might not know yet: even if you could go back, it wouldn’t be enough. Even if you could have the thing you so desperately miss, you can’t make yourself quit hungering. Just like with the doll or the telescope, your homesickness is a hunger that possession does nothing to mitigate. Children, you know already that if all your dreams are shattered, it will hurt. But you must understand that if everything comes about exactly according to your longing, it will still hurt. Homesickness doesn’t tell you what you want. It only tells you that you have not got it. 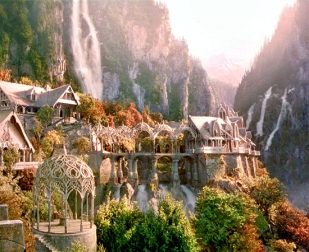 Sometime in your life you’ve seen some ghost of what you want. Somewhere you caught sight of water plunging from an ethereal height, or the winking lamps of a city far away, that tasted like the Better Country. Some page you turned spoke about it. Something whispered out of an unexpected stillness and reminded you that all striving towards wholeness is out of reach while the Last Homely House lies so desperately beyond your grasp.

There is a reason why I think you ought to express all this by saying you don’t belong here: because it’s important that you understand your dissatisfaction is no accident, no glitch in the system of the universe, no bug in the program. The hunger that you have, it has an object. Someone said it best like this,

“Happiness is not only a hope, but also in some strange manner, a memory. We are all kings in exile.”

The reason you can’t belong anywhere here? It’s because you already belong somewhere else. Those wants you have, that aren’t satisfied by anything you can get your fingers on? There is a place that has been shaped to fit into your desires.

There is a book that I hope you read someday. In it a young boy who has lost everything he has, meets an old man who is passing on. “I did not want you to fly away,” the boy says.

And there is great sympathy in the old man’s voice. “But we all must fly away.” It is the ghastly, gorgeous apex of truth.

“Why must we?” asks the boy. But he is pretty sure he already knows. “Because this is not our home?”

But if this is not our home, some other place is. “I go,” said the homeless world’s wanderer, when He was leaving, “to prepare a place for you.”

But how long the days are under the sun! – and you will be bearing your home-hunger all the way. Children, you must learn how to put roots out into the soil of a country, and make the fattest fruits you can produce, sun-ripe and splitting. After all, you may be here for a long time yet.

16 thoughts on “On Homesickness: A Letter to My Children”

I have lived in too many places and I'm homesick for the Far Country. I like thunderstorms, painting, calligraphy, fairytales and noisy crowds of children, and I write about literature, the good life, and the World’s Great Lover. In my spare time, I create calligraphy and illustrations celebrating literary masterpieces. You can find my work in my Etsy shop or request a custom order.

Letters From The Sea Tower

On Homesickness: A Letter To My Children

On Adventure: A Letter To My Children

On Growing Up: A Letter To My Children

On Heroism: A Letter To My Children

What If We Are Alone? [A Marsh-Wiggle Speaks]

The Lame Shall Enter First

The War From Where We Are

On Dorian Gray, Pre-Raphaelitism and The Treason of All Clerks

The Stag Who Lived Forever

Regarding The Time That is Given To Us

On Suffering, The Russian Soul, and the Kingdom of Heaven

On The Importance of Being Smike

On That Always Aching Wound

My Song is Love Unknown